Establishment of an affiliated company in Japan

“We have seen no improvement in market share in Japanese markets. We are not satisfied with this situation,” said a top executive of Austria-based Palfinger AG, a manufacture of cranes. The company, which has been developing business in Japan for around 20 years by commissioning their business to Japanese manufacturers in the same industry to serve as Palfinger’s general agents, decided to embark on cultivating additional markets in Japan for themselves. Mr. Peiwei Gu, who was responsible for the Japanese market at the Asian headquarters in Singapore, began establishing Palfinger’s affiliated company in Japan in 2015 in order to establish a domestic business hub. After the successful establishment of Palfinger Japan in Kohoku Ward, Yokohama City, in March 2016, he now serves as a representative director of the affiliated company.

Palfinger AG is the world’s eighth largest crane company. Looking only at the sales of truck-mounted loader cranes, the company boasts a 45% share in European markets, according to Mr. Gu. As the major demand for cranes in the Japanese market is for cranes with a straight extending arm with a hook connected by wire to the tip of the arm like a fishing rod, the market cultivation of loader cranes, which is one of the company’s strengths, is limited to industries which already use such cranes to load trucks with raw wood, scraps and industrial waste. Still, such industries represent an annual new demand market of approximately 500 vehicles, but competitors’ products still account for the majority in the market, which left the company with approximately a 10% share.

JETRO supported Palfinger in completing a variety of procedures

In early 2016, Mr. Gu by himself embarked on the preparations in Japan. However, he faced difficulties in completing a variety of necessary procedures. For example, he could not rent an office without completing a registration as a legal entity. “I tried to rent an apartment for personal use, but real-estate agencies rejected me as I’m a non-Japanese-national,” he said. He also tried to find employees, but Japan required him to register the affiliated company before hiring personnel and the procedure to compete the registration would take at least a few months. As this situation could have led to the failure of his efforts, he decided to receive support measures from the JETRO Yokohama Office in Naka Ward, Yokohama City. He said, “JETRO assisted me in completing a variety of necessary procedures related to visas, legal, tax, and labor affairs, and import procedures. The experts in respective fields gave me advice that helped me significantly. When we tried to complete import procedures, one of the advisors in the JETRO Yokohama Office who had experience in the import business provided me with a well-organized consulting service. Without his help, I could not have started our company without significant additional trouble,” Mr. Gu recalled.

Before renting the current office that JETRO helped him to find, Mr. Gu settled in a temporary office as part of the JETRO Yokohama Office from February to May 2016, taking advantage of a free-of-charge JETRO office space service through which users are able to use JETRO offices for up to 50 business days. He also benefited from JETRO support measures in the form of references to agencies for recruiting employees and succeeded in hiring one employee under the name of Palfinger Singapore before completing the registration as a legal entity. Following this, three additional employees jointed the company, one of which is Mr. Yoshiya Tsuji, who has experience marketing the company’s products across Japan and is now the executive manager of the sales and service departments. This brought the company to its current five staff members. In just over nine months from starting the procedures for the registration as a legal entity, the company secured their own warehouses to conduct final inspections of products that they had imported before shipping them across Japan. In January 2017, under the name of Palfinger Japan, the company successfully shipped their products for the first time in Japan. 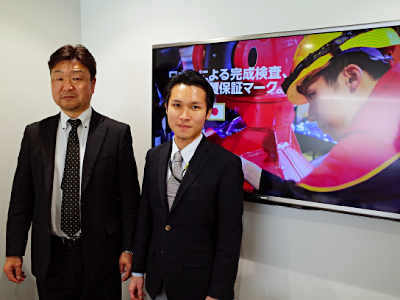 Representative Director Gu (right) and Executive Manager Tsuji, Palfinger Japan,
have known each other since before the establishment of the company

Securing human resources is a key for success

In starting business in Japan, Palfinger AG was able to take advantage of its 20-year experience in sales in the Japanese market, as seen by the fact that Mr. Gu and Mr. Tsuji knew each other before the business was established. “The toughest thing for overseas companies intending to develop business in Japan is securing human resources. Even for companies that are famous overseas, Japanese people tend not to apply for employment if they are not popular in Japan. This leads to difficulties in hiring personnel,” Ms. KieWai Khoo, project manager of the JETRO Invest Japan Business Support Center, who supported the company in starting the business, pointed out. Compared to Singapore, in which startups are able to complete the registration as a legal entity online using a simple procedure and to recruit employees without significant allocation of resources (e.g., due to low charges payable to staffing agencies, etc.) Japan has higher obstacles for overseas companies to overcome. It is now more necessary than ever before to reduce those obstacles.

In November 2017, Palfinger Japan displayed its new models at an exhibition held in Kagawa Prefecture for the first time in Asia, although the models are already in European markets. “Our sale process ends with the staff’s inspection of the finished products before they are shipped throughout Japan. We, at Palfinger Japan, will strive to demonstrate our unique business style that combines our commitment to quality with the advantages of being a European company,” Mr. Gu stated, showing his passion for the business in Japan. The company’s share of Japan’s market has recently grown to nearly 30%.