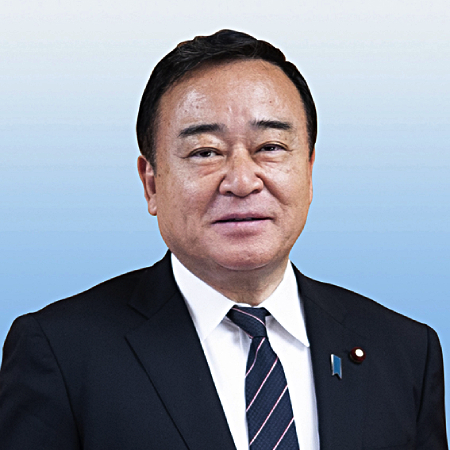 I would like to wish you all a Happy New Year.

I would like to pray for the souls of the people who died of COVID-19 and express my heartfelt sympathy for the people whose health and lives have been affected by it. I would also like to express my respect and appreciation once again to the employees of public health centers and medical personnel devoting efforts to containing tCOVID-19 pandemic day after day as well as business operators contributing to the smooth supply of testing devices and medical goods.

To combat the virus, mankind is still forced to avoid unnecessary travel and contact with others. This year, in order to overcome this unprecedented crisis, we must embrace this “new normal”, by transforming not only our lifestyles but also our industrial structure and social systems.

Around 100 years ago, the Great Kanto Earthquake occurred. At that time, there was a Japanese man who laid out a grand urban development plan for the post-earthquake reconstruction of Japan. I am referring to Goto Shinpei, who is said to have laid the foundation of what Tokyo is now through pioneering efforts and ideas in urban zoning. Goto, who was president of the Imperial Capital Reconstruction Department, mapped out a plan looking 100 years into the future with a resolve to never let a disaster like that which happened after the Great Kanto Earthquake to occur again. His plan was so grand that it inevitably met opposition, but he is said to have been a politician who always stood at the frontline to promote his plans.

Living in an era 100 years after those days, we must also have a vision like Goto’s and a strong will to carry out the task of overcoming the difficulties before us. In order to cope with present day challenges regarding COVID-19 as well as prepare for the forthcoming “post-COVID-19” era, we must fundamentally strengthen efforts to promote “digitalization”, shift towards a “green society,” satisfy new needs in the health and medical care fields and enhance “resilience” through the rebuilding of supply chains and other measures.

The international community has high expectations for Japan’s behavior as a standard-bearer of free trade amid developments such as the increased tension between the United States and China and the United Kingdom’s withdrawal from the European Union (Brexit). Japan must also make steady progress in the reconstruction of Fukushima from the aftermath of its nuclear disaster, which is the most important challenge.

The Ministry of Economy, Trade and Industry (METI) will assiduously deal with those challenges one by one.

This year marks the 10th anniversary of the tragic Great East Japan Earthquake and the accident at Tokyo Electric Power Company’s Fukushima Daiichi Nuclear Power Station. Thanks to great understanding and cooperation from both inside and outside of Japan, steady progress has until now been made in the decommissioning of the damaged nuclear reactors, and at long last, reconstruction has started to get underway in earnest. Based on the Mid-and Long-Term Roadmaps, we will continue the decommissioning while maintaining the stance of putting top priority on safety and emphasizing risk mitigation, including the processing of contaminated water through the ALPS system, and further enhancing communication with local communities and society at large.

At the same time, we will promote the rebuilding of businesses and livelihoods and the implementation of the Fukushima Innovation Coast Framework as the twin drivers of reconstruction. We will do our utmost to ensure that this initiative will make Fukushima a wellspring of new technologies and products that change the world and deliver concrete benefits to local communities, such as the creation of jobs and an increase in business transactions for local companies.

Actions toward achieving carbon neutrality by 2050

It is not going too far to say that climate change issues have now become an urgent and common issue for all humanity. Many countries and regions around the world, led by developed countries, have started to take action under the banner of carbon neutrality. Last year, Japan, too, declared the goal of achieving carbon neutrality and realizing a decarbonized society by 2050. To achieve carbon neutrality, industry, academia and government must set ambitious goals and visions and make earnest efforts to implement them. If Japan makes every possible effort to resolve those challenges one by one, that will be perfectly in sync with our growth strategy in that it will lead to new business opportunities. Based on the Green Growth Strategy and sector-by-sector action plans, which we announced at the end of last year, METI will implement every possible policy measure to create a virtuous circle of economy and the environment. Under the ongoing review of the Strategic Energy Plan, we will hold responsible discussions on the path to achieving carbon neutrality by 2050 based on the 3E + S (Energy security, Environment, and Economic efficiency, and Safety) principles.

Reinforcing the foundations of SMEs

Small and medium-size enterprises (SMEs) and micro-businesses, which together employ more than 30 million workers across the nation, form the backbone of the Japanese economy. However, they must get over a succession of various challenges, including not only structural changes, such as labor shortage and aging of society, but also dramatic changes in the business environment caused by COVID-19 pandemic, lifestyle reform, and the need to adapt to institutional system revisions, such as the expansion of application of social insurance.

We will continue to support smooth business succession, mergers and acquisitions (M&As) and productivity improvement efforts and strive to ensure the appropriateness of subcontracting transactions, for example by preventing unreasonable transfer of cost to subcontractors. In addition, we will promote business restructuring measures to adapt to the COVID-19 era and support SMEs aiming to grow into middle-ranking enterprises and capture market shares abroad.

Last year, Japan signed the Regional Comprehensive Economic Partnership (RCEP) agreement after eight years of negotiation. As a result, a huge free trade area accounting for around 30% of global GDP and global trade value will come into being. We also made sure that the Japan-U.K. economic partnership agreement (EPA) will be seamlessly put into force without any delay after the expiry of the Brexit transition period. In order to lead the international economic system based on free and fair rules as a standard-bearer of free trade, Japan will continue to promote the reform of the World Trade Organization (WTO) and the development of international rules concerning e-commerce transactions and the digital economy based on the Data Free Flow with Trust concept under the Osaka Track by using the Trilateral Meeting of the Trade Ministers of the United States, the EU and Japan and other occasions.

Ensuring economic growth and national security at the same time is also an important challenge. Amid intensifying competition for technological supremacy among major countries, in addition to promoting 5G (fifth-generation mobile communication)-related policy measures, we will resolve Japan’s vulnerabilities related to sensitive technologies and critical goods, including semiconductors and rare earths, and maintain and secure its technological advantages. To that end, METI will promote technology development and implement coordinated measures to prevent technology leakage in cooperation with relevant ministries and agencies.

According to the 60-year Chinese zodiac cycle, 2021 is the year of the Metal Ox. The year of the Ox, which is the second year of the 12-year cycle, is considered to be a “year of sprouting” when past efforts take a solid step towards blooming into results. In 1961, which was the previous Metal Ox year, Yuri Gagarin made the first manned space flight, a veritable blooming of humanity’s efforts after a long period of seeding and cultivating. In this new year of the Metal Ox, I sincerely hope that we will be able to hold the Olympics and Paralympics in Tokyo, which were postponed by one year, with humanity’s efforts to overcome the pandemic blooming into a “victory over COVID-19”.

This year, I appreciate your continued understanding and support once again.