G7 IP Offices Will Support Economic Recovery After the Pandemic

The G7 Heads of IP Office Conversation was held via video conference on November 19, 2021, bringing together leading officials  from IP Offices in G7 member states (G7 IP Offices). During the Conversation, the participants shared their recognition of initiatives on IP intersections with public health; IP and future technologies including Artificial Intelligence (AI); best practices in IP enforcement; and increased cooperation between G7 IP Offices and other entities including WIPO. They also indicated that they would aim to establish a balanced and international IP environment wherein the benefits from innovation and creativity can be maximized, and said that they would support the global economic recovery after the pandemic. Consequently, the G7 IP Offices successfully adopted their Joint Statement for the first time.

On November 19, the Intellectual Property Office of the United Kingdom (UKIPO), the Presidency of the 2021 G7, hosted the Conversation via video conference. In addition to the G7 Heads of IP Offices, the Director General of World Intellectual Property Organization (WIPO) Mr. Daren Tang also participated in the Conversation as an observer. The participants held discussions on issues in the IP field, and adopted the first Joint Statement made by the G7 IP Offices.

2. Results of the G7 Heads of IP Office Conversation

(1) Adoption of the Joint Statement

Through the Conversation, the G7 IP Offices compiled a Joint Statement and confirmed that a good Intellectual Property system brings trust and certainty to innovators, creators, and other stakeholders.

In order to establish a balanced and international IP environment in which the benefits from innovation and creativity can be maximized, as well as to support global economic recovery after the pandemic, the G7 IP Offices shared their recognition of initiatives on the following: (1) IP intersections with public health, (2) IP and future technologies including AI, (3) best practices in IP enforcement, (4) increased cooperation between G7 IP Offices at WIPO and others.

(2) Remarks from the Japan Patent Office

Mr. Mori, Commissioner of the Japan Patent Office, commented that an IP system is essential in order to support the promotion of innovation in fields such as public health. He also remarked that an IP system plays a key role in encouraging development of future technologies such as AI, and touched upon the importance of creating an environment of effective IP enforcement. 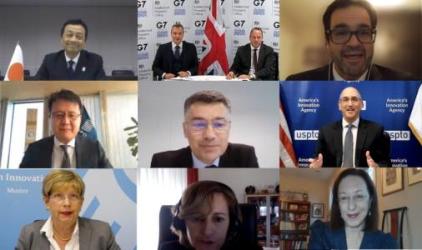